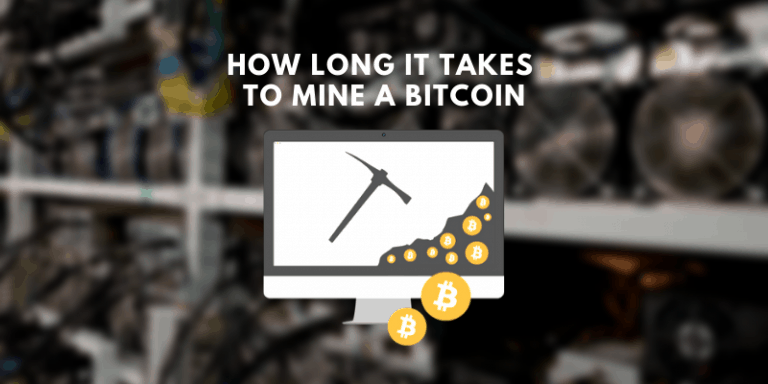 You have different opinions on the time required to mine a bitcoin. Somewhere you have read 10 minutes and some will say 1 month or 1 year.

It’s not easy to calculate the time that it takes to mine a bitcoin. To understand how long does it take to mine one single bitcoin, you first need to absorb the process of how bitcoin mining works.

Let’s dig a little deeper to understand what is bitcoin mining and how exactly it works. Then time calculation will make more sense.

What is Bitcoin Mining

Mining is a distributed consensus system that groups pending transactions and adds them to the blockchain.

It protects the neutrality of the network by enforcing a chronological order in the blockchain and different computers agree on the state of the system.

These transactions must be packed in a block that completes some strict cryptographic rules and then verified by the network.

These rules prevent alteration of previous blocks because alteration would invalidate all the subsequent blocks.

Other important terms you should know to understand mining better are as follows.

A node is a high-tech computer that operates the special bitcoin software and participates in the relay of information to keeps bitcoin running.

You can also run a node, you just need a bitcoin software and a high-speed internet running 24×7. The only drawback of mining node is that it requires lots of energy and storage space.

Let’s see how a node works. One node sends bitcoin information to a few nodes known nodes, those nodes further relay the information to other known nodes. Eventually, the first node ends up covering the whole network immediately.

These nodes (also called miners) combine outstanding transactions into blocks and add them to the blockchain.

How do they do this?

They solve a complex mathematical puzzle. The puzzle that needs solving is to find a number which is when combined with the data in a block and passed through a hash function, produces a new block to be added in the blockchain. Not as simple as it seems.

#2. How to Solve the Puzzle

Miners guess a random number to solve the puzzle. The mathematical function ‘hash’ makes it impossible to predict the output number.

Thus, miners guess that secret number, combine that with the data in the block and apply the hash function to the combination. If it works, they get the reward.

In reality, there’s no way to know which number will work because two consecutive numbers can  give varying outputs.

If it happens, the first miner announces its win into his network. Other miners immediately stop working on that block but begin to figure out the new mystery number. The winning miner gets some new bitcoins as a reward.

It’s not easy to get because lots of miners compete for that reward. Now it has become a matter of luck and computing power because more calculations you can perform in a certain time, more chances of winning you would have.

Also, you not only need powerful hardware for faster calculations but also requires a large amount of electricity to run those monsters.

And, the rise in the cost of electricity and hardware can reduce the compensation but to a certain extent only.

Time Required To Mine A Bitcoin

You need at least 10 minutes on an average to process a block.

Why 10 minutes? Bitcoin developers think 10 minutes are necessary for a streamlined flow of new coins until the maximum number of 21 million is reached.

This is an ideal situation but in reality, it is different. The time required to mine a bitcoin varies from hardware to hardware. You need powerful ASIC (application-specific integrated circuit) machines to mine bitcoins.

Apart from hardware, the time it takes to mine 1 Bitcoin varies on

So now you would be able to know how the time is calculated to mine a bitcoin. You need bigger resources to increase the probability of getting a bitcoin.

But if you are on a budget, you would like to buy a GPU rather than going for more expensive ASIC (application-specific integrated circuit ) like Bitmain AntMiner.

GPUs are less expensive but are considerably less in power. So its all up to you (the miner) and your resources that decide the duration of mining a bitcoin.

Let me know what hardware are you using for mining.